We would like to welcome you to our online support group meeting.

As a result of Covid-19 restrictions and social distancing measures, our group are introducing online tinnitus support group meetings. Our meetings will offer flexible support, an opportunity to meet       existing members who are managing the  condition, all from the   comfort of your own home.

The meetings will be via zoom -To get the login information please contact us at mail@tinnitussupport.org.uk or by phoning the group on 01246 380415

Login and bring a brew

You will need a computer able to access zoom and a webcam or built in camera.

The BTA state “Tinnitus is the perception of noises in the head and/or ear which have no external source. It derives from the latin word for ringing and those living with the condition may have to endure a ringing, buzzing, hissing, whistling or other noise. The sensation can be constant or intermittent.”

Why do we react to Tinnitus? Why does it appear worse at some times than others?

To answer this, we can look to some basic principles of the psychology of perception.    Our sensory systems provide vast amounts of information on the objects and events around us, but too much for us to utilise effectively.

To do that we need perception, the process by which we become aware of the information and make sense of the incoming data so as to allow us to interpret it in a meaningful way and act accordingly.

Sensation and perception are two separate processes that are closely intertwined.  Sensation represents the ‘input’ – in this case our tinnitus and the perception is the process by which the brain selects, organises and interprets these sensations.

Perception is a creation, it is our brains, mind and the neurons inside our heads creating the world for us.

When we hear a stimulus – our tinnitus – the first thing we do is attend to it – pay it attention.  We need to do this because we need to process it.  This is not the end of the process because then we need to recognise it.  As it is an internal sound and not one we are used to – it becomes frightening because we can’t recognise it.

However, perception also takes into consideration our prior experiences, the effect of memory, learning and previous encounters with a similar stimuli.

Think about your Tinnitus – what does it sound like?

The sound of the television when it used to close down in the evening – we need to react, switch it off.

We are continually bombarded by stimuli, but we are not always aware of it.  We don’t always feel the pants we are wearing unless we pay attention to them. One of the ways we manage tinnitus is by bringing in other stimuli for our senses. However, if we focus intently on our tinnitus we could miss the other stimuli (inattentional blindness).

If you have been to one of our workshops we may have shown you the famous study by Daniel Simons and Christopher Chabris (1999).  In this study participants watched a video of people dressed in black and white passing basketballs.  Participants were asked to count the number of times the team in white passed the ball.  During the video, a person dressed in a black gorilla costume walks among the teams.  You would notice a person dressed as a gorilla surely as it is so unusual?   Nearly half of the people who watched the video didn’t notice the gorilla at all.  They were so focused on the people passing the ball they completely tuned out other information.

Audrey has often told the story where she was chatting to a friend but never heard what the friend was saying, she was only paying attention to her tinnitus.

Try listening mindfully to your favourite piece of music or song.  Can you make out all the words?  Distract yourself from your tinnitus by concentrating on your other senses – sight, smell and touch.

Motivation can also affect perception.  You may not want to be paying attention to your tinnitus but you are tuned into.  Motivation can be positive and negative.  It may be whilst waiting for an important call, you think you hear the phone ringing whilst in the shower.

It is the same effect when a mother sleeps through a thunder storm but hears the slightest cry of her baby, she has an emotional reaction to this sound and so reacts to it and not other stimuli.  Again, you perceive your tinnitus in a noisy environment because you are tuning in to it.

A number of our group members state they notice their tinnitus after being in the car and coming in the house.  This is the contrast between the noise of the engine and the quiet house.  Of course, tinnitus is most noticeable at night when you have had other stimuli around, maybe the TV, radio or your partner talking and then suddenly the quiet bedroom.

Try sleep Apps or under-pillow speakers. Pillow Speakers are available from the British Tinnitus Association. See below for website address.

Helen Jeffery first came to know about the group in 2012 when she started with Tinnitus. Helen is also a professional career life coach and trainer and we asked her to put some tips together for staying positive over this very different and difficult time. Helen has put together a fantastic presentation and video which contains some useful tips for us all. https://www.youtube.com/watch?v=RUcc5HIZVPg&feature=youtu.be&fbclid=IwAR31ZQw_nx08jdgQwKTp4Imne-ZwUqsg8UcQQAtxEVR9dkxfyeCeQYN87hY

In a survey by the British Tinnitus Association 6 out of 10 people reported difficulty sleeping with Tinnitus. We are pleased to announce thanks to Chesterfield Health and Wellbeing Small grants scheme we have a wealth of resources, books and information to loan and share to help get a Good Night’s Sleep with Tinnitus. To find out more come along to our event on 6th April at Monkey Park, Brampton Chesterfield 1pm – 3pm 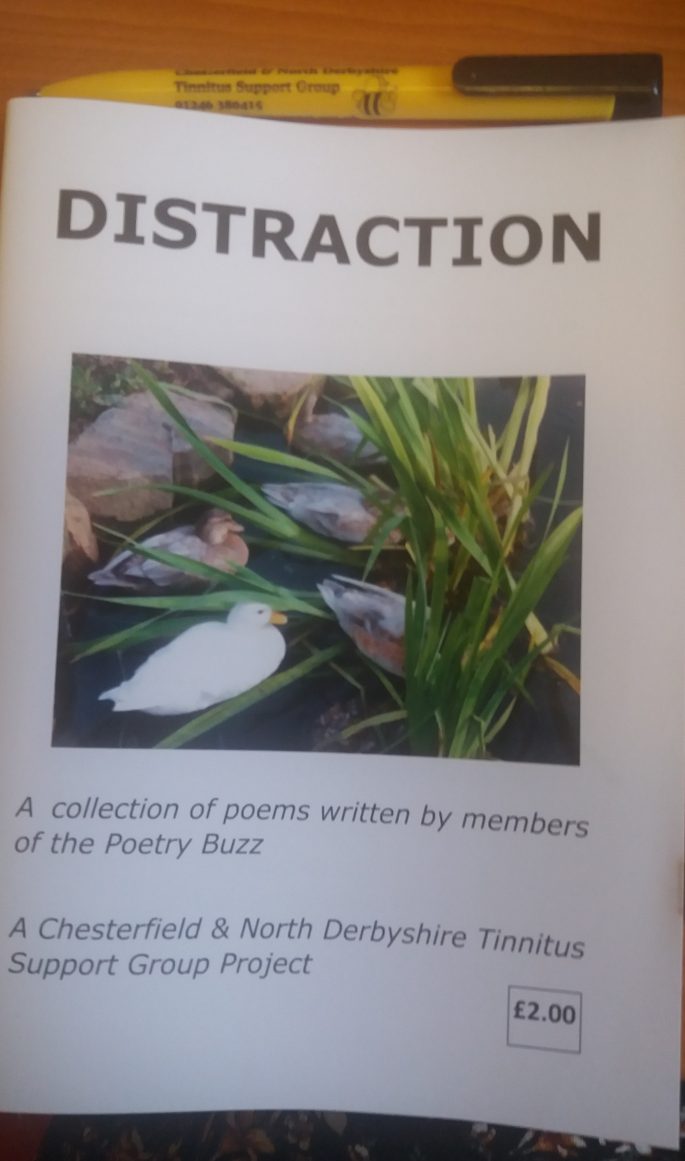 The Poetry Buzz book has arrived! A compilation of poems written by group members, with the theme of wellbeing and mindfulness, has now been printed thanks to the support of Thompsons Solicitors. We will be selling the books at future events at the bargain price of £2 – all proceeds will go to the support group. If you can’t make it to an event but would like us to post one, please send a cheque for £2.50 (the extra 50p to cover postage) payable to Chesterfield Tinnitus Support to 34 Glumangate, Chesterfield, S40 1TX. Alternatively, you can call in at the office and pick one up – call 01246 380415 to check that we are here.

Can you be involved with a research study?

Tinnitus and stress Stress is known to have an impact on health, and is linked to tinnitus. For example, people who have more severe tinnitus report a higher level of stress and more stress symptoms than those who had milder tinnitus. Some people also link the start of their tinnitus with the occurrence of a stressful event. But it is not clear whether tinnitus acts as a stressor, or stress leads to or makes tinnitus worse. At the NIHR Nottingham BRC (University of Nottingham), PhD student Asma Elarbed is conducting research to answer this question. She is measuring “cortisol” which is an important human hormone that is released by the “adrenal gland” in response to stress. She is comparing the level of cortisol (from hair sample) in people who have tinnitus with those who do not have tinnitus, and before and after tinnitus starts. This will tell us more about the biology of tinnitus. She is also looking at issues that relate to stress and tinnitus, namely depression, anxiety, memory, and attention, to determine how all these factors relate to each other. If you would like to participate or to know more, contact Asma Elarbed at this email: asma.elarbed@nottingham.ac.uk 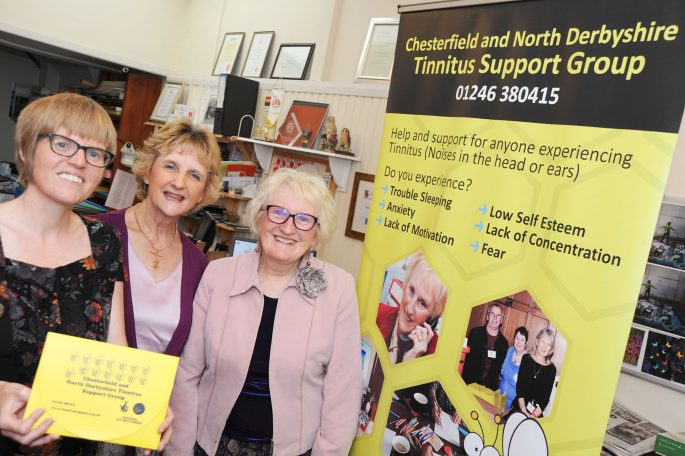 We were pleased to work with Jack Todhunter to produce a short promotional video about our group, how we have helped and supported our members.  Please watch this short video to find out more about our group, what help and support we offer and how we can help you.  https://www.youtube.com/watch?v=GQBgEZe26PY&t=1s 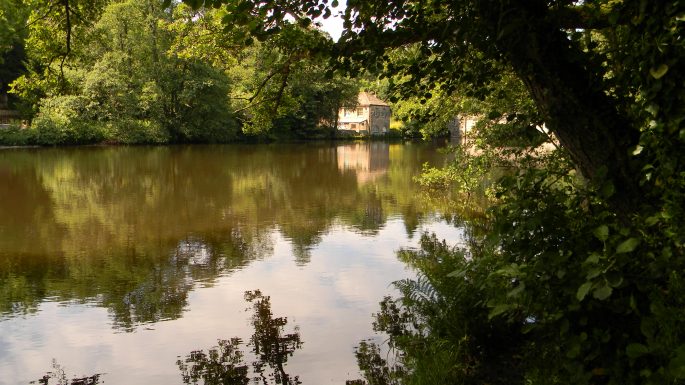 In conjunction with Walking for Health we are organising a series of Wellbeing Walks.  The walks will last 30 – 90 minutes and are suitable for most walking abilities.

Look out for our next wellbeing walk coming soon

The walks are open for anyone who needs to walk for health and not just people diagnosed with Tinnitus.   The Walks are a great way to meet new people, have a chat, laugh and help to get fit.     Sponsored by the Community Fund. 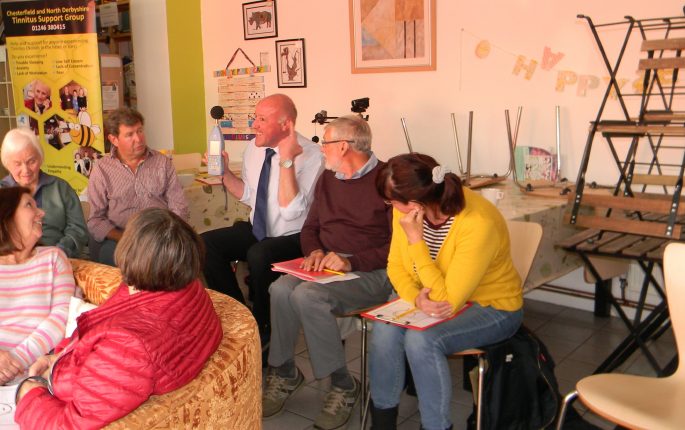 Join us for a Coffee and Chat at Monkey Park Community Cafe, 128a Chester Street, Brampton, Chesterfield, S40 1DN on Monday 6th April 2020 from 1pm – 3pm

The Cafe is not open to the public and so if you have recently been diagnosed with Tinnitus or suffering from ringing in the ears or head, this is a great meeting to come along meet our members, in a relaxed and friendly environment.  There will be an opportunity to ask questions, share experiences or concerns as well as chat to people who understand the condition.  Please feel free to bring along a partner, relative or friend.  Tea, coffee and biscuits will be served.    Parking is on the road.

Thanks to money from Five Ways to Wellbeing we were able to introduce our Poetry Buzz workshops.  These were fun and interactive and everyone was brave enough to share their work and supportive and encouraging to each other.  Many were surprised at their poetic achievements.  The project won most innovative project at the Voluntary Sector Awards in 2018

Thanks to Derbyshire Voluntary Action – Small Grants Scheme  we were able to secure money to continue these workshops.

The themes this year relate to our memories

August – Wednesday 26th – On the Screen

September – Wednesday 30th – All dolled up

The feedback was all very positive.

Tinnitus is rarely a sign of a serious underlying condition. For some people it may come and go and only be a minor irritation.

However, it can sometimes be continuous and have a significant impact on everyday life. Severe cases can be very distressing, affect concentration, and cause problems such as difficulty sleeping (insomnia) and depression.

Respondent to the Conference 2015

“Knowledge is the most important and useful thing I have learnt from the workshops.  Not only knowledge surrounding tinnitus but the knowledge that I am not alone and that there is a good group to offer support”

“Meeting other like-minded people and listening and learning from their experiences has given me the inspiration and confidence to help me live with my tinnitus.”

Respondent to the Conference 2016

“The workshops have shown me that there is more to life and that I should not let tinnitus dictate what I should or shouldn’t do.”

Our services rely on volunteers and charitable donations. If we have been able to help you please consider sending a donation using the links.

Your continued support is important in ensuring tinnitus sufferers like yourself find the right help and advice to manage their condition.